Baseball was big in my family when I was growing up.  As legend has it, my Papaw had a shot at playing for the Cincinnati Reds but was prevented from his chance at the pro's because he was the only one in the family who could carry the keg of beer from the basement of the family bar and bring it upstairs to tap it behind the counter.

Both my brothers were talented at the sport, especially my oldest brother who was a natural and had a passion for the game.  Either he viewed baseball as something he was passionate about or something to get him into a college scholarship after high school, either way he was good at what he did on the diamond.

If my oldest brother was passionate about baseball our father was a fanatic.  Dad spent hours upon hours researching methods and techniques to improve our ability to hit, field, and throw the baseball.  I can remember pulling pieces of rubber tubbing with a baseball attached at the end to develop arm strength.  I can remember throwing a dish towel into a mirror while standing on a 2X4 to improve my balance and delivery, and I will never forget the infamous Ken Griffey Jr. "Instruct-O-Swing" contraption we would hit baseballs off of and into a backdropped net my father had built for us to be able to practice in the off season inside our family garage.
I have happy memories from my childhood involving the game of baseball and my family and I have nightmares involving the game that I have tried to erase from my memory for most of my adult years. 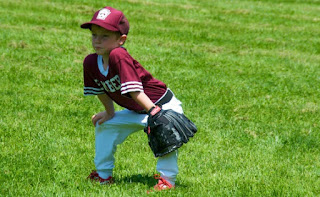 One of those nightmares happened when I was just a young boy, maybe 7 years old or so.  It was the first year the kids were allowed to pitch during games and not have to rely on the coaches to lob the baseball directly over home plate so we could hit rockets into the outfield.  It was an indoor practice our team was having in a local gymnasium.  I was on the pitchers mound and I was struggling to throw a strike, in fact I had hit 6 kids who were just trying to take batting practice.  My father stood behind the backstop and made hand gestures and arm movements and tried to quietly mouth instructions to me as he watched the nervousness get the better of his seven year old son.  He looked like a wild character, standing back there, obviously frustrated but still loving and only wanting his young boy to succeed.  My coach stood off to the side of the "field", he was a drunk with a thick mustache and was married to a woman that coached a team we considered to be our rival.  I can remember my coach turning his head from watching my father give instructions to watching me hit his players in their rib cage. 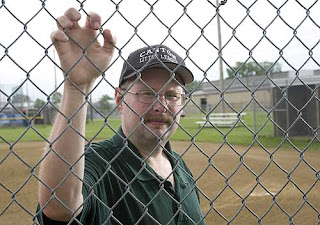 After awhile the coach called timeout and asked my father to join him out on the mound.  I stood there as the coach began to express how he thought my father was being a distraction to me and then watched as my father disagreed and said he was helping me.  This continued for a few minutes as I stood there, my seven year old self turning and twisting my head to the left and then to the right as I followed the conversation, bewildered and confused as to what was actually taking place.  All I knew was I had a few teammates crying because I'd hit them and maybe cracked a few ribs and now two adults had stopped practice to come and talk about something on the pitchers mound.
Everything sounded like noise to me until suddenly I heard my name.
"Anthony!  Son, who do you want to listen to?  Who do you want to coach you?"  The words left the mouth of my alcoholic coach and snapped me back to reality.
Immediately I felt alone, helpless, confused, scared, worried, terrified, and any other words you can think of.  I would have pissed my pants had there been enough water in my system.  I didn't know what to say, I didn't know what to do.  There my father and my coach stood, towering over me, both men looking down into my eyes and waiting for the answer of a seven year old to determine who would win their argument and ultimately who would walk away with their head held high and their chest puffed out.  I thought this was why God created women, to settle arguments between men and determine who was more manly.  Well, for whatever reason I was the one in charge of making that decision now.  After what felt like an eternity and after what seemed like a thousand voices screaming the question into my ears I finally answered.

My father immediately had a look of total defeat on his face.  I think I saw tears welling up in his eyes as he dropped his head down and walked back to the sidelines.  My coach, with a drunk smile on his face knelt down, placed his hand on my shoulder and began to give me instructions.  All I could do was watch my father walk away, obviously saddened and disappointed.  Suddenly this wave of emotion swept over my body as I felt responsible for his defeat.  I had given him over to the enemy, betrayed my dad to a drunk little league coach with a mustache.

The entire drive home on the dark backroads of Kentucky I sat in the front seat with my baseball glove in my lap and told my dad I was sorry, I told him I didn't mean it, I wanted to pick him but I didn't know what to do.  I don't remember him saying much that night or even looking at me.  I just remember seeing the glow of the dashboard lights in his face as he squeezed the steering wheel and drove us home.

Most of the time these decisions are choosing between God and sin.  What voice do I want to listen to in the moment?  Do I want to listen to God or do I want to follow sin for awhile to see what happens?  When God says, "She's not your wife" will I still choose to follow her for awhile anyways?  The answer to that is yes.  And just like when I was seven, I frequently make the wrong decision of who I want to coach me.
Thankfully, God doesn't walk away with His head tilted down to the ground looking defeated.  God gracefully and loving encourages me and brings me back home and back into His arms.